The federal-state institution of culture and art "Orenburg Garrison House of Officers" of the Ministry of Defense of the Russian Federation filed a lawsuit to the Arbitration Court to force the defendant / user of the site [ZapadnoAbdulino LLC] to eradicate the “foundation pit” dug for the construction of the "Atrium" shopping and administrative complex many years ago. As part of the trial, the judge of the Orenburg Region Arbitration Court, Anna Kalashnikova, ordered an examination to determine the causes and nature of the damage to the building of the "House of Officers", which stands very close to the “foundation pit”. According to the plaintiff, the House of Officers is in terrible condition precisely because of the defendant’s construction works.

And this is where the fun begins. In 2002, the administration of Orenburg issued all permits ZapadnoAbdulinO LLC to start building "Atrium". But after that the user of this land was forbidden to finish the construction, and for the last 15 years the situation hasn’t changed. But in 2012, the regional government adopted decrees that approved new boundaries for the territories of historical and architectural monuments and a special regime for the use of land within the boundaries of these buildings, including, of course, the House of Officers (in Orenburg it is also called the "Military Assembly"). After that, ZapadnoAbdulino LLC, the user of the land, could not continue with the works and mothballed the construction site. However, in turn, the administration of the federal-state institution of culture and art "Orenburg Garrison House of Officers" did not care about the neighboring "pit". It did not prevent them from repairing the building. Moreover, the technical documentation, which came into possession of the journalists, issued by the State Budgetary Institution “State Cadastral Assessment Center of the Orenburg Region”, shows that the building was built in 1875. And since then, official documents do not contain any information about its major repairs, i.e., there were no capital repairs in 145 (sic!) years. There is no data on repairs in court proceedings either. According to the same technical documentation as of 20.03.2001, clause E7 shows the total percentage of deterioration of the building to be 46%. This clause happens to indicate a library in the House of Officers, which is adjacent to the "foundation pit."

One does not need to be an expert to see the absence of a causal link between the collapsing library of the House of Officers and the foundation pit:

1. The building on the right seems solid, painted, and in good condition. On the left though, one can see the collapsing library of the House of Officers. They were built in the same year, 1875. 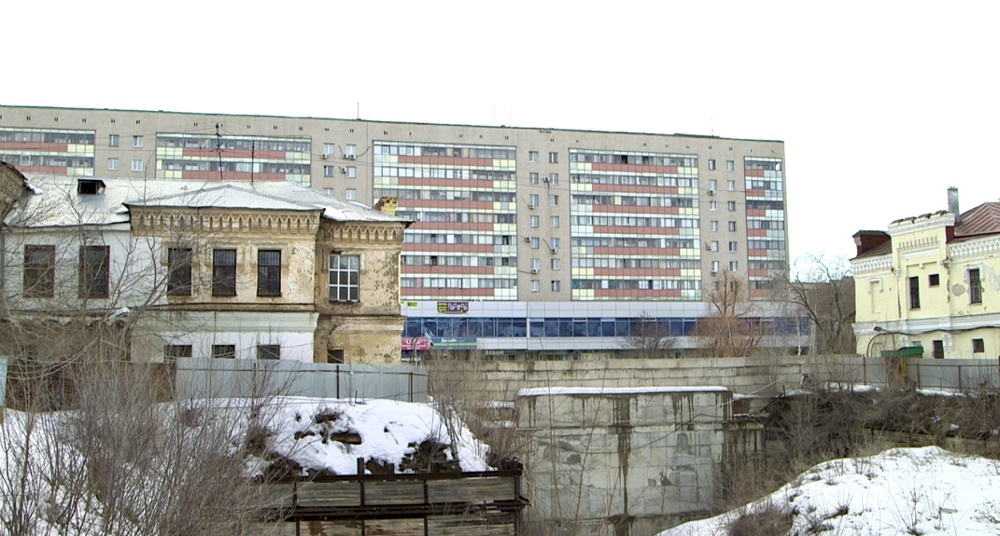 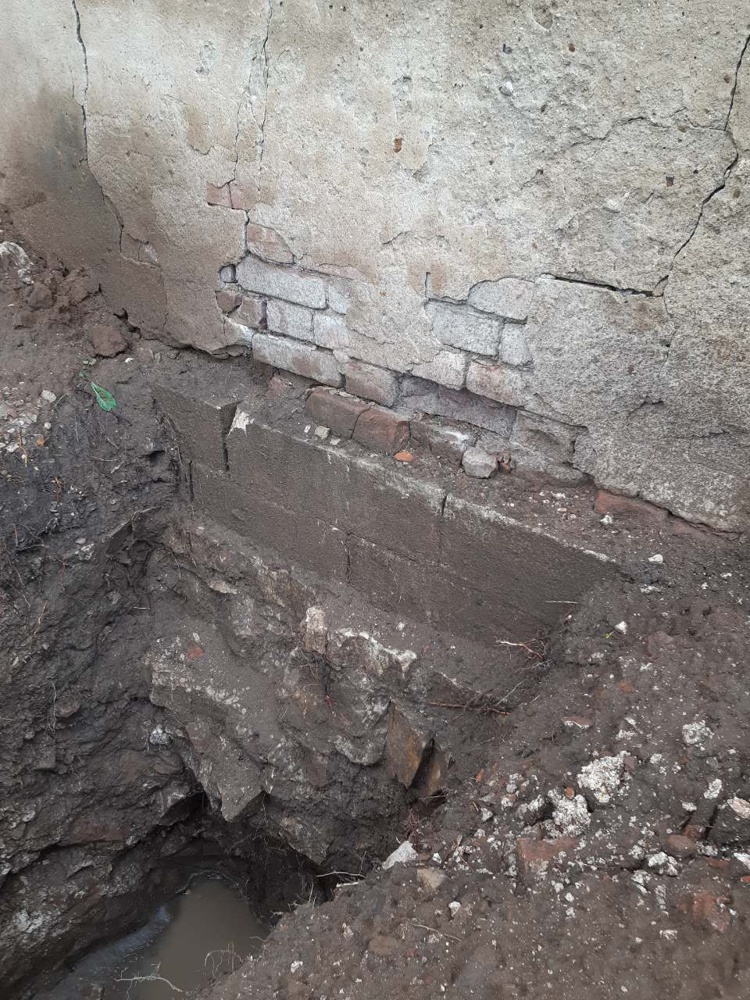 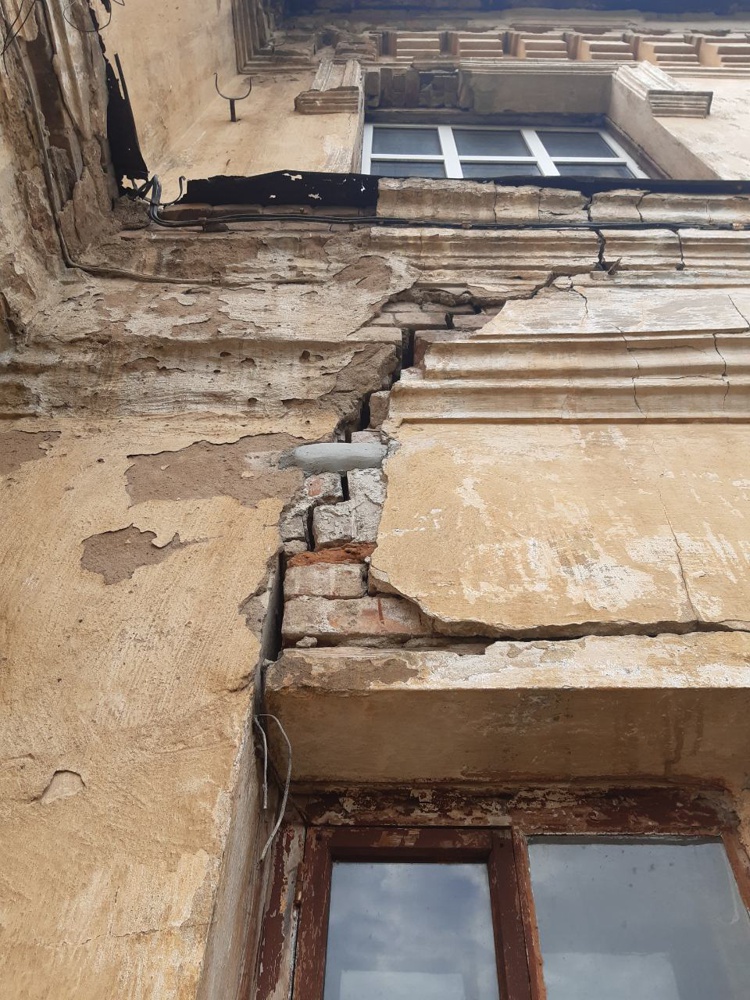 The following entities were called into trial as third parties: the Orenburg city administration and the Inspectorate of State protection of the Orenburg region cultural heritage. All of them are so worried that the “foundation pit” poses a threat. Yet, they don’t seem to care that liquor stores and amusement facilities have set shop in the House of Officers of the Orenburg Garrison, which, per se, is a cultural heritage: 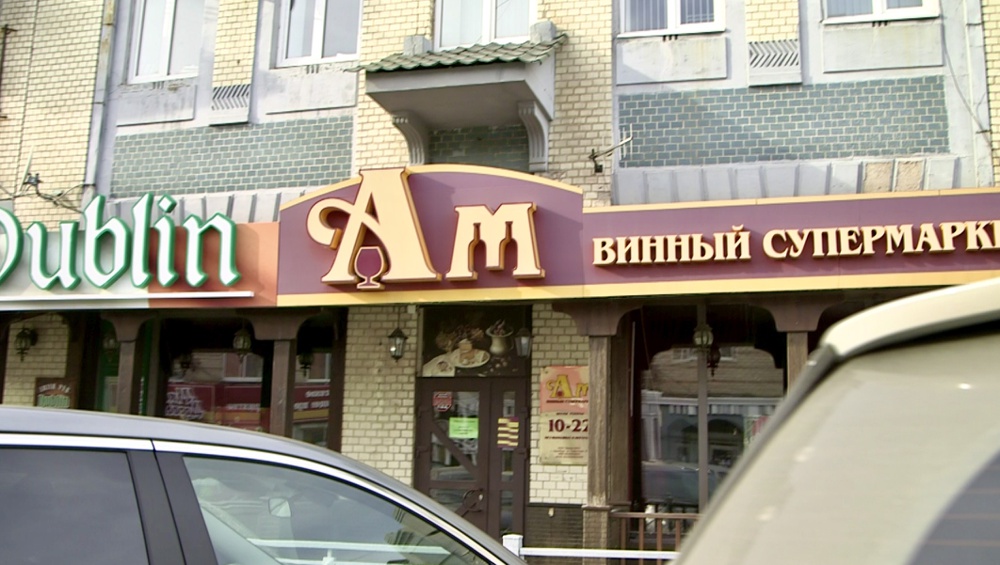 There should be a massage room and a pole dancing studio in the “Military Assembly” to complete the picture. The above-mentioned objects have been there for more than a year. And for all these years, people from the Orenburg administration or the Inspectorate of State Protection of the Orenburg Region Cultural Heritage, or Pasler himself, haven't closed any of the above-mentioned joints and did not protect the cultural monument from destructive influence. It’s an Ideological contradiction.

The front part of the House of Officers from this side also looks deteriorating: in some places one can see pieces of plaster falling off and bricks falling out, although this happens at the opposite side of the street. The building here is built in Soviet ties and there is no neighboring “foundation pits” to explain the situation. Something doesn't fit here. 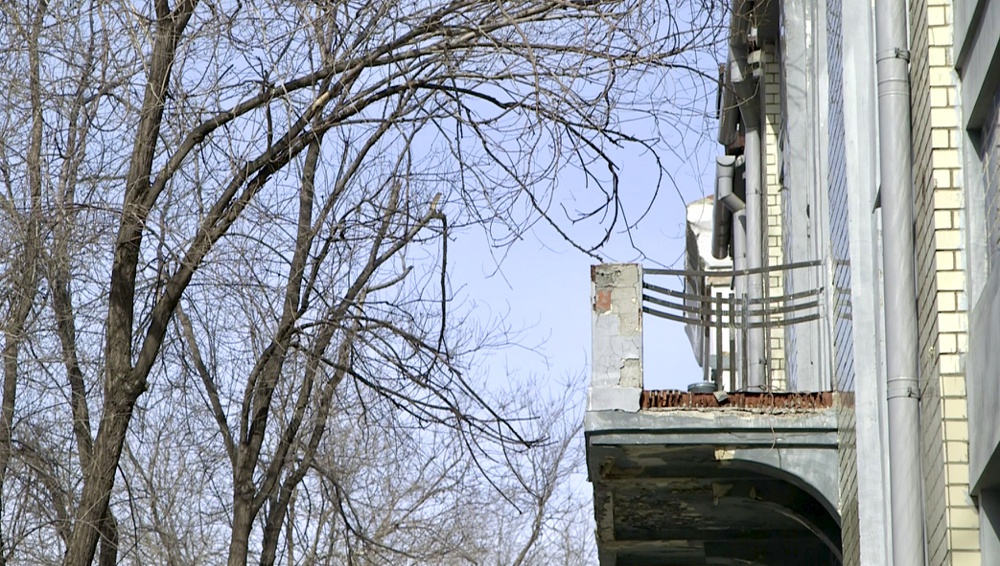 For Orenburg, it seems that the practice of installing pubs, karaoke and hookah bars in architectural monuments of a military nature, such as the legendary "Flight School", where Yuri Gagarin studied, is becoming acceptable.

It also turned out that the website of the Public cadastral map doesn't have the building of the federal-state institution of culture and art "Orenburg Garrison House of Officers" of the Ministry of Defense of the Russian Federation enlisted at all (sic!). It just doesn't exist! Obviously, the building has not yet been registered withing the cadastral register for 145 years. So, what they are arguing about in the court?  Why did Orenburg officials not have enough time to coordinate actions with Rosreestr so that this architectural monument would finally appear on the official website of the State entity? And at the same time, they do have time to repeatedly appear in court as regular listeners during working hours in similar case against "ZapadnoAbdulino" LLC.

The developer has not been allowed to finish the construction of a shopping complex in Orenburg for more than 15 years. During the trial, a huge area in the center of the city was closed to the public. The new Governor Denis Pasler could have gracefully resolved this conflict: let the "Atrium" be finished, so that the new commercial and administrative center would appear and the "pit", in its turn, would magically disappear from the face of the Earth. Perhaps there would even be some investors interested in repairing the House of Officers at their own expense. 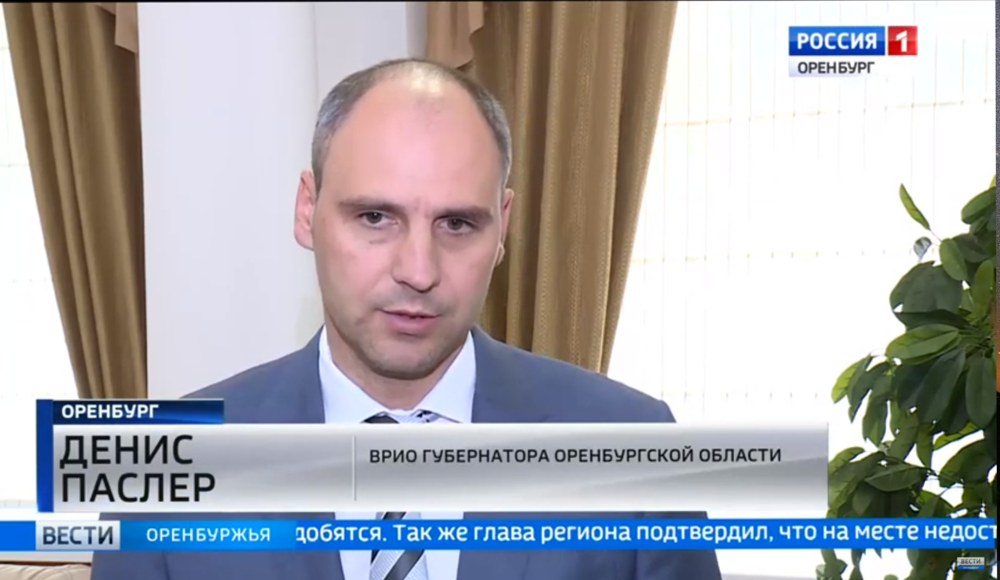 The whole sad story was passed to Pasler by his predecessors. When he came to the office, there was hope that the situation would be resolved. And investors who had invested a lot of money would finish the construction, and the city would get a harmonious architecture master plan. But that was not the case. It was exactly the opposite.  Denis Pasler saw some "hypothetical" threat in this unfinished building situation to the life and health of Orenburg residents and at a meeting of the anti-terrorist Commission ordered this property to be withdrawn. Then, it would only be fair to "withdraw" the entrance to the Ural River waterfront that is now collapsing after recent repairs to contain hypothetical threats. Also, it would be fair to withdraw deteriorating roads that have bulged after the autumn repair. By the way, both the entrance to the river and the roads were repaired by Denis Pasler's administration. Withdraw the deteriorating building of the "Flight School". Everything needs to be withdrew to prevent any hypothetical threat.

And as we can see, the only thing that's hypothetical is Pasler's activity. Instead of doing something real for a change and allowing investors to develop the region and thereby attract new investors, the only thing Pasler does is trembling with hypothetical fear and withdrawing everything he can from the public space. So, here's the question: can Pasler himself be, uhh... withdrawn?  Probably yes, by Vladimir Putin that is.

"Gagarin, we're sorry! We totally ... up!" The Flight school in Orenburg is falling apart before our eyes.

Today, there’s a hookah bar in the basement of the school, and a security booth at the entrance to the school. And along with the dying school dies our History. The veneration of Yuri Gagarin's feat is dying.